As most of my friends know, I’m not very good at watching movies. Put me in a dark room with only a screen to stare at and I’ll be asleep within twenty minuets. Therefore most of my movie watching stems from an inability to fall asleep at night and the whims of netflix’ streams. That being said, I do have a few favorites like this one I discovered a few weeks ago. 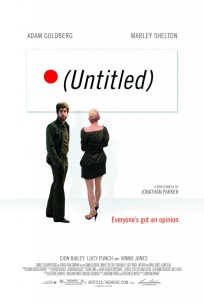 I had just watched 2 Days in Paris for at least the fifth time in the past month and was craving something else with Adam Goldberg. (Untitled), a satire of the modern day art world, made me chuckle, grimace and did not put me to sleep. Goldberg plays Adrian Jacobs a tortured composer engrossed with creating his masterpiece of what his peers, family and friends describe as disgusting noise (his “music” involves screaming, clinking chains and kicking a bucket). The story focuses on his discovery by his brothers love interest and art gallery owner Madeline Gray (Marley Shelton). The plot goes on to explore and make fun of what is considered art in modern day and how the whims of the public are influenced.

The film is often as aimless and as incoherent as the art it mocks, but Goldberg’s bitter humor pulls through crisp and biting – just how I like it. Perhaps though, my favorite part of the film is Shelton’s outfits. A large element of the film is the absurdity of her clothing (Goldberg becomes infatuated by the loud noise her skirt makes as she walks), but I cannot help myself. She has a porcelain tree to hold her multitude of spectacular glasses (a pair for every outfit)!